In Rovaniemi, the flood exceeded the damage limit on Friday night and was at its highest on the night between Saturday and Sunday (at Lainaa observation station N2000+77.62 metres). At the Valajaskoski observation station, the maximum flow rate 4,147 m3/s was measured on Saturday. The water level has already dropped slightly, and it is predicted that the falling of the water level will accelerate in the next few days. The volume of the flood was very close to the same level than in 1973 and 1993.

In Kittilä, the flood in Ounasjoki has remained slightly below the damage limit for four days. This morning, the water level at the observation station in the village center was at N60+176.71 metres. The predicted rainfall in the catchment area should melt the rest of the snow which may slightly increase the water level. The flood will clearly be smaller than the major flood of 2005.

The first flood peak in Ivalojoki occurred on Friday, after which flows and water levels have decreased slightly. Because of the melting of the rest of the snow and predicted rainfall, it seems there will be a second flood peak, but the flow is not likely to rise much higher than the figures measured on Friday. Due to the slow melting of snow over a longer period of time and the sunny weather, the flood will likely be smaller than the major flooding in previous years.

According to the forecast, the flood peak in Tornionjoki will only occur on the latter half of the next week. The water level will probably rise 0.5-1 metres more, and the maximum flows are estimated to be approximately 2,700-3,000 m3/s. The flood will be smaller than the 1968 record flood. In the Pello area, the water level is expected to stay slightly below the damage limit.

Due to the flood, road 19618 Kainuunkyläntie in Ylitorniemi is currently closed. Current traffic information https://liikennetilanne.tmfg.fi

The next flood bulletin from the ELY Centre for Lapland and the Flood Centre concerning the Lapland area will be issued on Friday, and the situation will also be reported on e.g. Twitter. If the situation changes from the forecast, it is immediately reported. You can find the flood forecast and warnings map on the national www.ymparisto.fi/tulvatilanne (in Finnish) website. Forecasts are updated every few hours. 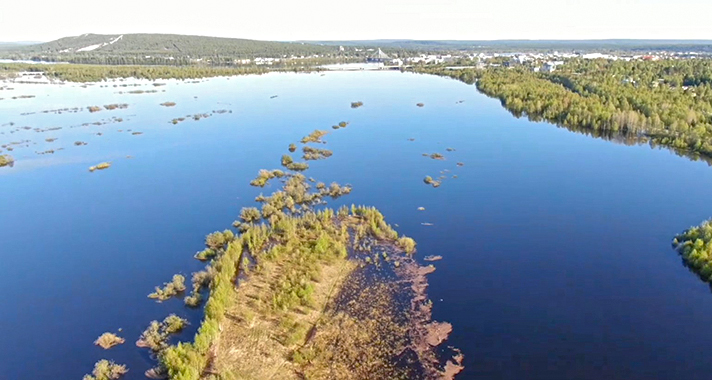