In Rovaniemi and Kittilä, water will rise close to the flood peak at the end of the week. In both areas, the flood peak will be long and will probably last for a week. In Kittilä, the flood is expected to rise to the same level as the 2005 flood, and in Rovaniemi it is expected to exceed the damage limit or even reach the level of the 1993 flood. The flow is estimated to exceed 1,000 m3/s in Kittilä and 4,000-4,200 m3/s in Rovaniemi. The ELY Centre warns of high river flows and treacherous coastal embankments.

River flows in Lapland have been on the rise in the last days since the heat wave has been causing snow to melt quickly. The region of Northern Lapland should expect cool, rainless weather for a few days which slows down melting and spreads flood peaks over a longer period of time. Starting at the beginning of the week, the weather will start to warm again and it is likely that the rest of the snow will melt in catchment areas. If heavy rainfall occurs during the next week, this may significantly affect the flood peaks.

In all waterways, water levels will rise by about 1.5-2 metres from the current level. If past flood records are exceeded, floods may cause damage to sites where the risk of flood damage has not previously been identified.

In Ivalojoki, cool weather flattens the flood peak and the water level is estimated to be at its highest in the middle of the next week. According to current forecasts, the flood will stay below the damage limit. As more than half of the snow has not yet melted, major flooding could be expected if the weather becomes warmer than anticipated or there is rainfall. The flow is estimated to be between 600 and 800 m3/s.

The flood peak in Tornionjoki is estimated to happen at the end of the next week. Flows in Tornionjoki are also predicted to grow beyond normal spring floods (between approximately 3,100 and 3,500 m3/s.) In these cases, the water level of the Tornionjoki river remains below the flood embankments in Tornio and Pello but some damage may occur outside the embankments.

Citizens should be aware of higher than normal water flow rates. Boating and other movement in flood waters is dangerous. In addition, beaches are susceptible to erosion and may become treacherous due to corrosion from flowing water.

In shore areas, make sure that all docks, boats and other structures have been safely moored and protected. Farmers should avoid driving sludge to flooding fields as this will increase nutrient pollution. Exceptionally large floods bring water onto many local and main roads.

The next flood report for the Lapland region will be issued on Friday, and the situation will also be reported e.g. on Twitter. If the situation changes from the forecast, it is immediately reported. You can find the flood forecast and warnings map on the national www.ymparisto.fi/tulvatilanne (in Finnish) website. Forecasts are updated every few hours. 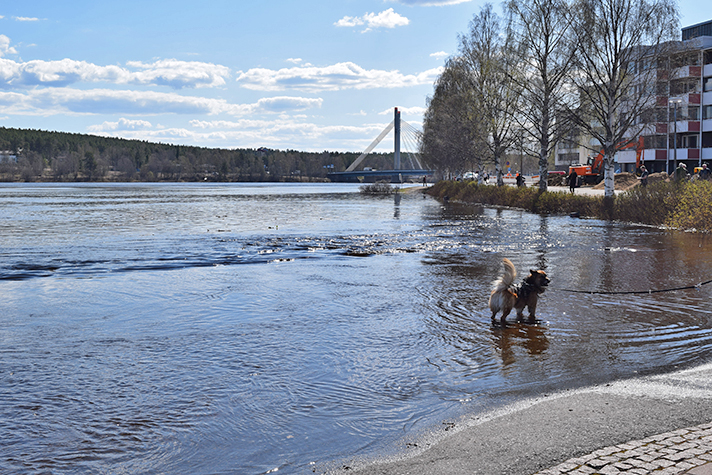